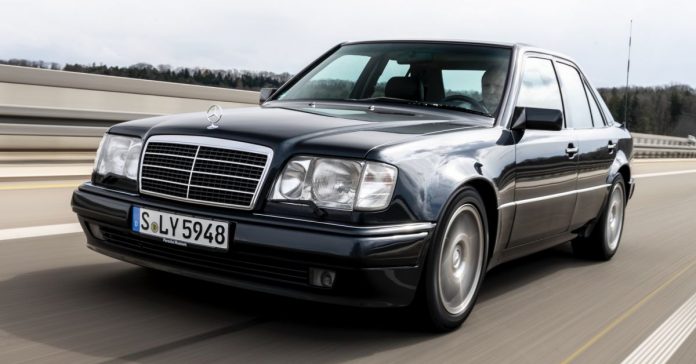 The W124-generation Mercedes-Benz E-Class is probably one of the most well-loved executive sedans of its time. It was available in a range of body styles and powertrain offerings, and among them stood the special 500 E and The Hammer, the latter a creation by AMG. But did you know that the 500 E was built in close collaboration with another Stuttgart company – Porsche?

That’s right. In 1988, Mercedes-Benz (then Daimler-Benz AG) awarded Porsche AG the development contract for the 500 E, a high-performance variant that was to be equipped with a 5.0 litre V8 engine plucked from the 500 SL. The engine produced 326 PS and 480 Nm of torque, and when paired with the four-speed automatic gearbox, would sprint from zero to 100 km/h in 6.1 seconds. The top speed was electronically limited to 250 km/h.

Now, why did Porsche agree to build a Mercedes-Benz E-Class? Well, the contract came at a time when Porsche was going through revenue decline from the export market. It was also not meeting key performance indicators, thus suffering from production cutbacks. At the same time, Daimler-Benz couldn’t squeeze another model into its Sindelfingen production line because the plant was too small. The investments required for new tooling wouldn’t have been worthwhile, so outsourcing it was the only feasible option.

So, from 1990 onwards, Porsche began manufacturing the 500 E at its Reutter facility in Zuffenhausen. When production started, Porsche only produced 10 vehicles a day, but this quickly rose to 20 units due to strong demand for the model. Fun fact – the first 14 units were all built by hand, before mass production began.

Porsche was responsible for 90% of the 500 E’s development, and oversaw the full integration of drive and vehicle components. The 500 E went on sale in the spring of 1991, and by 1995, approximately 10,479 units of the four-seater bruiser had been built. It only seats four because the differential was too big, so there was no room in the middle of the rear seats.

The 500 E turns 30 this year, which means it has reached classic status. To celebrate the milestone, Porsche invited Michael Hölscher, former Project Manager Development for the 500 E and Michael Mönig (Prototype Management) to take one for a spin.

Looking at the Sapphire Black Metallic example, Hölscher said “it’s almost impossible to believe that the design could be so perfect 30 years ago without CAD data. I have enormous respect for my colleagues in the body shop and especially their vision.” The pair’s eyes were constantly drawn to the 500 E’s flared fenders, which is one of its distinguishing features from regular W124 variants.

Besides the flared arches, the 500 E was 56 mm wider than the base W124 model, and sat 23 mm lower to the ground. The 5.0L engine was shoehorned up front, and due to the combination of space constraints and weight distribution, the battery had to be installed at the rear right side of the luggage compartment. Other notable upgrades include uprated brakes and exhaust systems, as well as chassis and suspension tweaks.

The last time Hölscher and Mönig sat in the 500 E was 30 years ago, where they drove to Lake Constance. “It had plenty of power, but without being ostentatious, both dynamic and luxurious at the same time. The 500 E is not a showy vehicle. It represents pure understatement, and catches the eye only at second glance,” Mönig said, adding that the 500 E was and still is his favourite project.

“The collaboration with colleagues at Mercedes-Benz was very respectful, focused and on equal termas and was based on a great desire for success. That was very special,” Mönig said. The only series production W124 that was more potent was the aforementioned Mercedes-Benz AMG Hammer, which packed a 6.0 litre V8 engine making 376 hp and 580 Nm of torque. It would do the century sprint in 5.4 seconds.

Recasting Dr. Strangelove If It Were Made In 2021